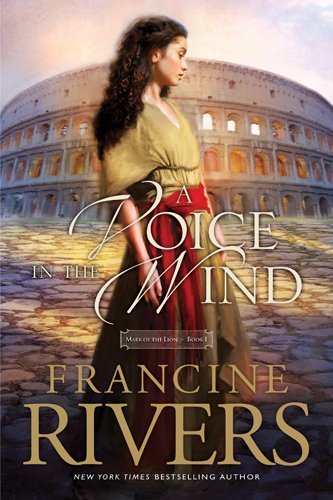 Book 1 in the 3-book historical Christian fiction series by the New York Times bestselling author of Redeeming Love and The Masterpiece.

The first book in the beloved Mark of the Lion series, A Voice in the Wind brings readers back to the first century and introduces them to a character they will never forget―Hadassah.

While wealthy Roman citizens indulge their every whim, Jews and barbarians are bought and sold as slaves and gladiators in the bloodthirsty arena. Amid the depravity around her, a young Jewish slave girl becomes a light in the darkness. Even as she’s torn by her love for a handsome aristocrat, Hadassah clings to her faith in the living God for deliverance from the forces of a decadent empire.

Includes discussion questions suitable for individual use or group discussions

“Francine unlocks the longing in each one of us to connect to God in a deeper, life-changing way. No one reading her books will ever be the same again.”
―Debbie Macomber

“As we ‘watch’ Hadassah and Atretes struggle through first-century trials, we learn how to handle similar situations in the twenty-first century. The ‘costumes’ may vary, but our Lord does not change.”
―Angela Hunt

“Francine Rivers writes from her heart to touch the hearts of her readers. Her books are essential reading for all who love Christian fiction.”
―Bodie Thoene

“Francine Rivers puts readers right into the history of the moment.”
―Romantic Times

Mark of the Lion Gift Collection

Travel to first-century Rome in this classic series from the bestselling author of Redeeming Love and The Masterpiece. All three books in this latest edition of the Mark of the Lion Collection include a foreword from the publisher, a preface from Francine Rivers, and discussion questions suitable for personal and group use.

A Voice in the Wind

The first book in this inspiring trilogy, introduces readers to Hadassah, a young Jewish girl captured and sold into slavery but still holding firm to her faith in God. Though torn by her love for a handsome aristocrat, Hadassah becomes a shining beacon of light in the darkness and depravity around her.

An Echo in the Darkness

In An Echo in the Darkness, Marcus, a wealthy Roman aristocrat touched by Hadassah’s sincere belief, begins to wonder if there’s more to this life. As he continues to search for meaning and faith, he is led by a whispering voice from the past that could set him free from the darkness of his soul.

As Sure as the Dawn

The trilogy concludes with As Sure as the Dawn, which follows Atretes, the high chief of a Germanic tribe who fought as a gladiator and won his freedom. As Atretes sets out to return home with his infant son, only one thing stands in his way: Rizpah, a Christian widow who has cared for the baby since his birth.