EA Sports have released their Top 100 overall player ratings for FIFA 21 and, as usual, the updated grades have made waves among both gamers and the players themselves.

The major headline news is that Lionel Messi has seen his FIFA rating fall for the first time in four years after what may have been his most challenging season.

But has the Argentina superstar kept hold of his place at the top of ratings? And who are the big new entries, the highest climbers and the biggest sliders in this year’s Top 100?

What a difference a year makes 🌟 pic.twitter.com/wkr26YJQ1A

A total of 18 players have broken into the Top 100, with newly crowned PFA Young Player of the Year Trent Alexander-Arnold enjoying the biggest boost to his stats — from an 83 last year to an 87 this time out.

The likes of Jadon Sancho, Erling Haaland, Serge Gnabry, and new Chelsea pair Timo Werner and Kai Havertz have also made it into the upper echelons on the back of breakthrough seasons.

In particular, Haaland has made a massive leap all the way from his original FIFA 20 rating of 73 (which was boosted to 79 in the winter upgrade) all the way up to 84 in FIFA 21. 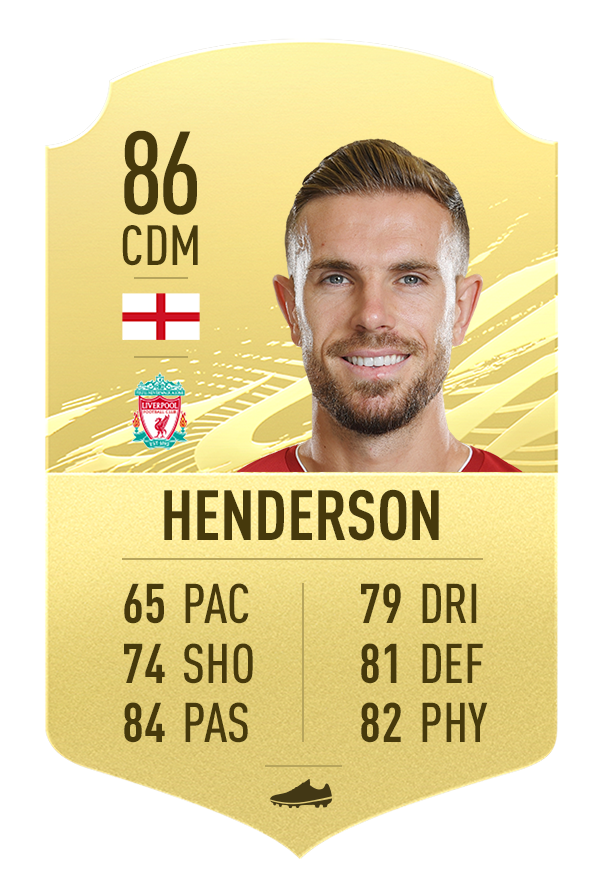 Liverpool captain Jordan Henderson (who has three teammates in the Top 100, more than any other club) has been propelled into the Top 100 with a new rating of 86. Intriguingly, this is slightly better than the downgraded 85 awarded to Champions League winner Thiago Alcantara, who has been heavily linked with a move to the Reds all summer.

At the age of 33, Jamie Vardy has been included in the FIFA Top 100 for the first time in his career after winning the Premier League Golden Boot last season. The Leicester City striker has a new rating of 86, which puts him on par with Paul Pogba, Marco Verratti and Thomas Muller. 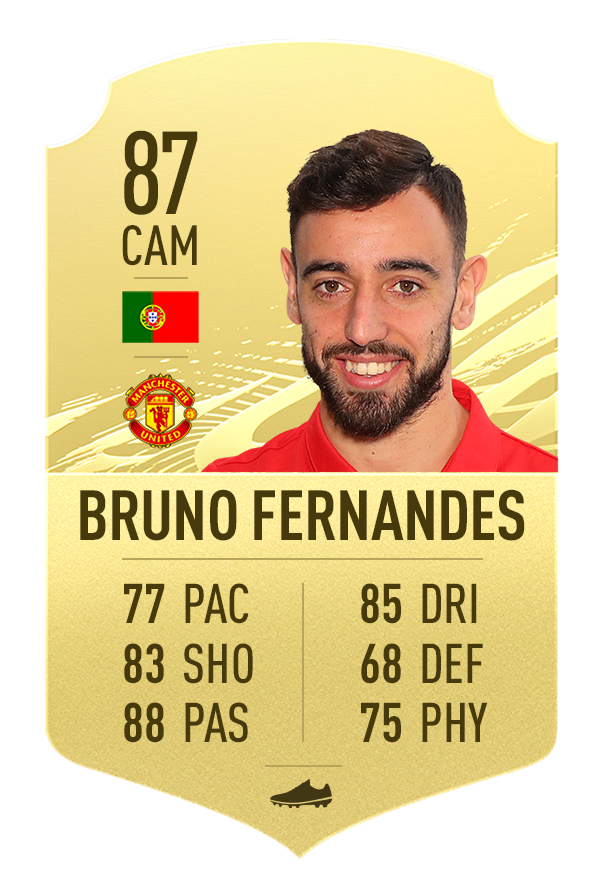 A strong start to life at a new club can work wonders for your FIFA rating — just ask Bruno Fernandes. The Portuguese playmaker has leaped from 99th right the way up to the giddy heights of 44th after impressing in his first half-season at Manchester United.

The biggest climb in year-to-year ranking has been achieved by Ciro Immobile, who leaps 40 rungs from 70th to 30th after scoring 36 goals for Lazio last season, winning the European Golden Shoe as a result.

Immobile’s phenomenal rise was almost matched by Liverpool defensive midfielder Fabinho, who sees his ranking power up from 82nd to 44th, a rise of 38 places.

Several other Reds also enjoyed a large spike in their ranking, with Henderson making into the Top 100 for the first time, as well as Andrew Robertson going from 79th to 43rd in the space of a season, and Roberto Firmino also finding himself 21 spots higher on the list (rising from 62nd to 41st).

Other big climbers include Chelsea new boy Hakim Ziyech (97th to 72nd) and Joshua Kimmich who springs from 56th to 19th after firmly cementing his place in Bayern Munich‘s all-conquering team. 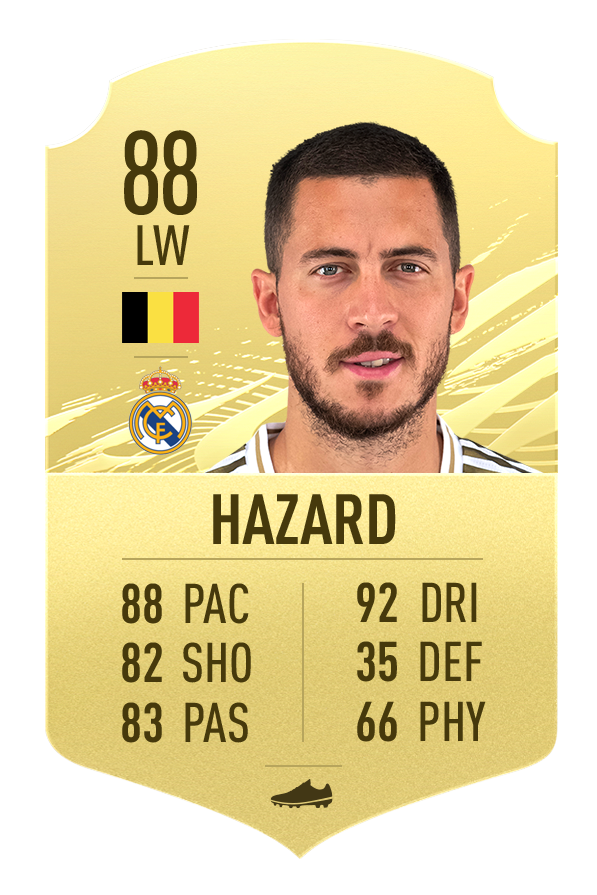 Eden Hazard has the misfortune of seeing one of the biggest slides in terms of overall rankings after the Belgian falls from being the fourth-best player in FIFA 20 all the way down to the 22nd in FIFA 21. The Real Madrid forward’s rating has been decreased from 91 to 88 after an underwhelming and injury-stricken season in Spain.

Indeed, Los Blancos don’t boast a single player in the Top 10 this year, having to be content with having five players located between 11-20 in the overall stakes — the highest being Sergio Ramos (89) in 14th place.

Hazard wasn’t the only big-name player to slide down the rankings either with Luka Modric, Giorgio Chiellini and Antoine Griezmann all ousted from the Top 20. 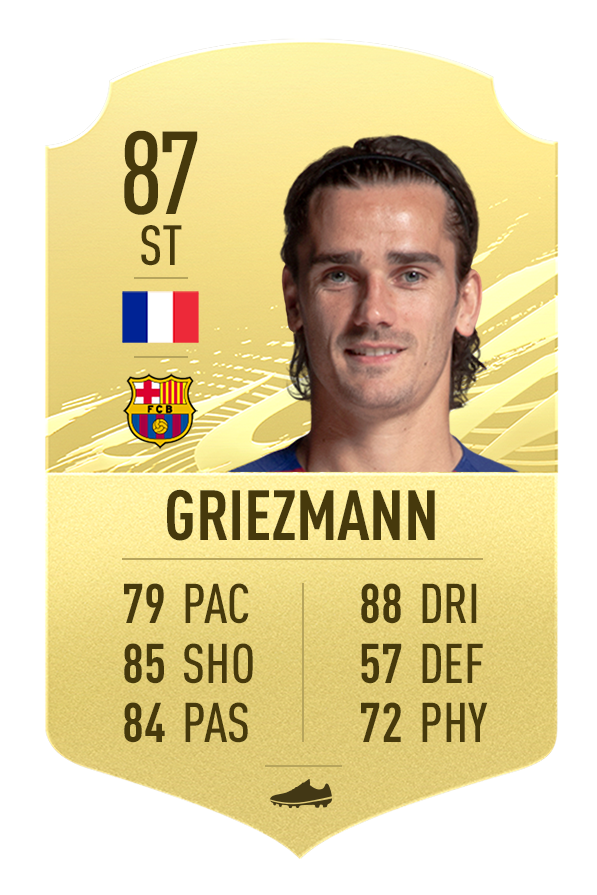 Previously a Top 10 star in the FIFA 20 rankings, 2018 Ballon d’Or winner Modric falls from a lofty perch of ninth all the way down to 29th, while a two-point rating reduction from 89 to 87 sees Chiellini tumble from 14th to 47th in the space of a year.

Perhaps the most dramatic descent is Griezmann, who has slipped 18 places from 20th down to 38th after slogging through a mediocre debut season at Barcelona, with his rating being slashed from 89 to 87 as a result. Ouch.

Waiting for my Finding out I have
new FIFA rating 63 pace 🥴 pic.twitter.com/XyA8OgyF3g

Not everyone was happy with their new ratings. While Liverpool defender Virgil van Dijk was once again the highest-rated defender in the game, things didn’t go quite so well for Aymeric Laporte.

The Manchester City centre-back was excited to see his new FIFA card, only to have the wind taken out of his sails by what he feels is an overly harsh pace rating.

Arsenal captain Pierre-Emerick Aubameyang could only express his surprise at being downgraded by one point to 87 (falling from 25th to 36th in the overall ranking) through the medium of emojis.

Let’s be honest fifa just mess with the ratings so we players start complaining about the game and give them more publicity… i ain’t with this sh*t. I know what i do 🤷🏿‍♂️

One player who refuses to legitimise FIFA’s player ratings is Romelu Lukaku. The Inter Milan striker saw through the hype, and didn’t mince his words while making his thoughts on the matter known.

For the record, Lukaku’s rating of 85 has sent him up from 86th in the overall FIFA 20 ranking to 77th this time out. 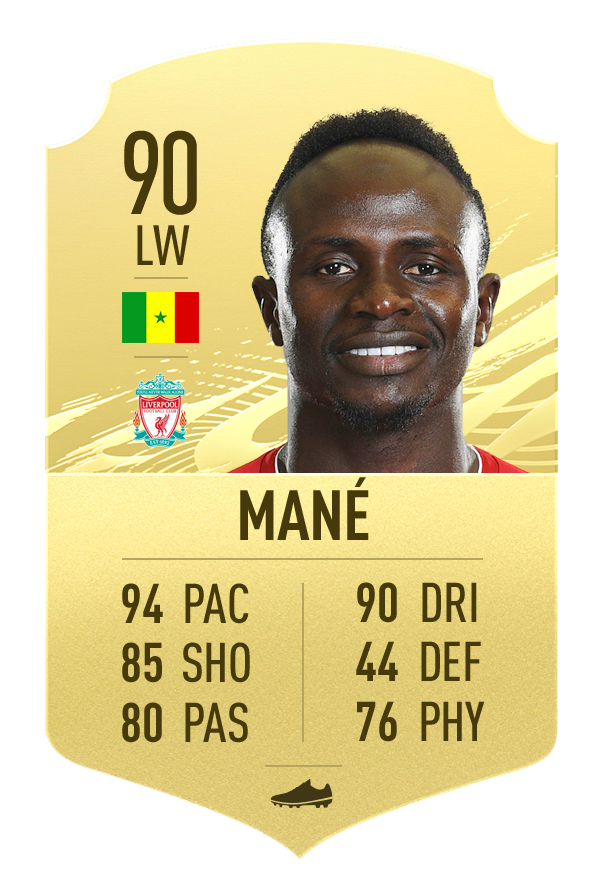 A new face in the Top 10, Mane’s integral role in Liverpool’s historic title-winning campaign has seen him leap up from 28th in last year’s FIFA ratings thanks to a massive stat boost. 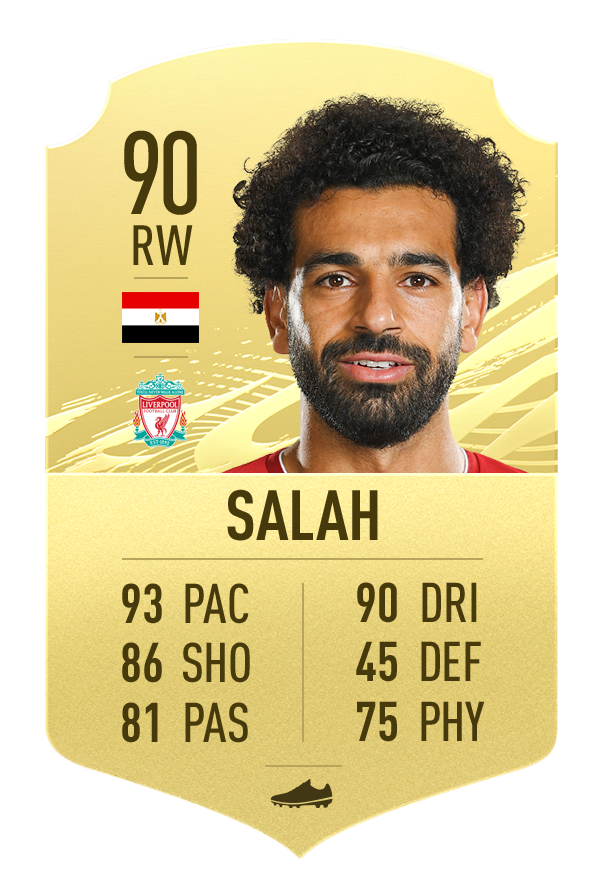 Mane’s strike partner has actually slipped down one place from his FIFA 20 ranking, though a couple of his technical stats (notably his dribbling) have been increased to compensate. 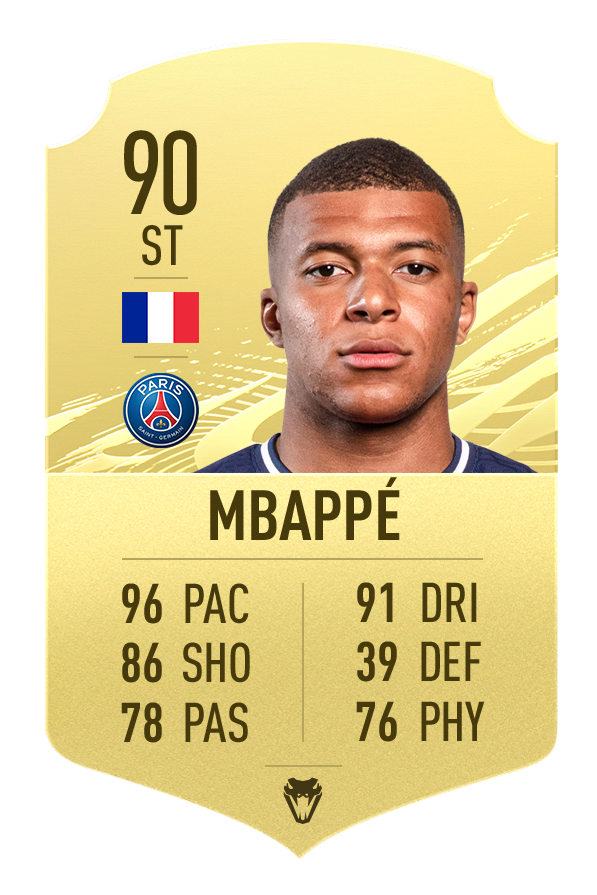 Mbappe has seen his mercurial career progression mirrored by a huge leap from 11th in the FIFA 20 rankings to eighth this year, though his overall rating has only been bumped up by one point, from 89 to 90. 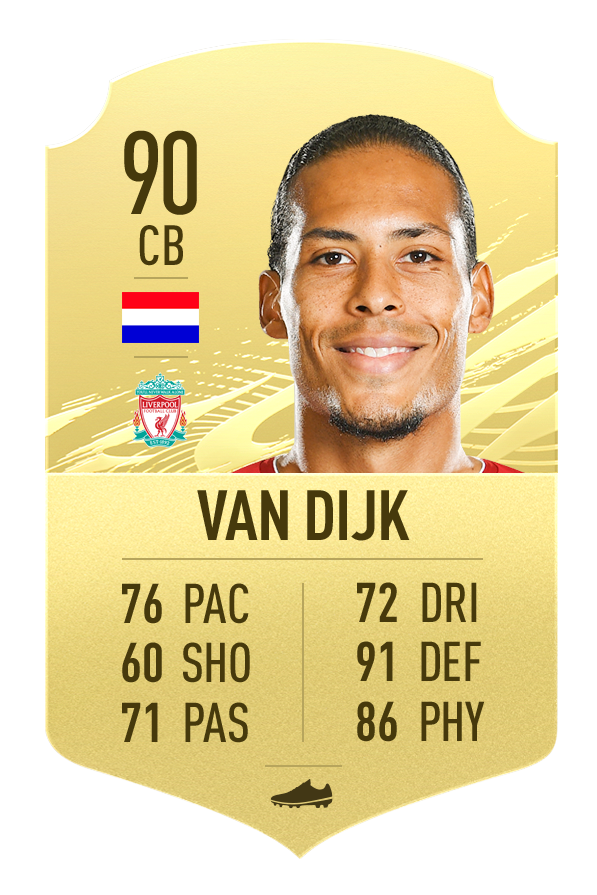 The best defender in the game for the second year running, Van Dijk has maintained his 90 rating from FIFA 20 though his technical stats have fallen very, very slightly. 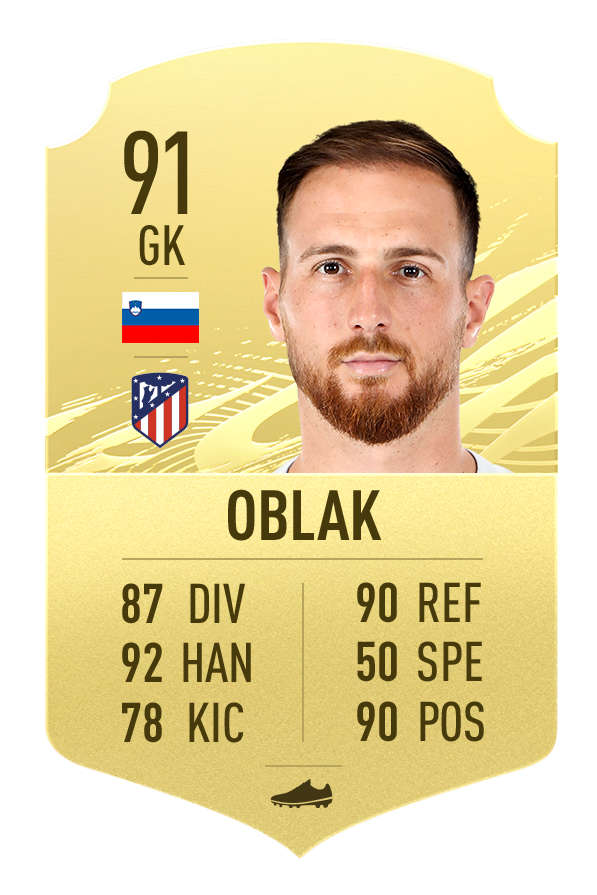 Oblak is comfortably the best goalkeeper in FIFA 21 with an overall rating of 91 — the same rating awarded to the Atletico Madrid No. 1 last year.

Marc-Andre ter Stegen is the next keeper on the list with an overall rating of 90 making him the 11th strongest player in the game, while Liverpool shot-stopper Alisson (also 90) is right behind him in 12th. 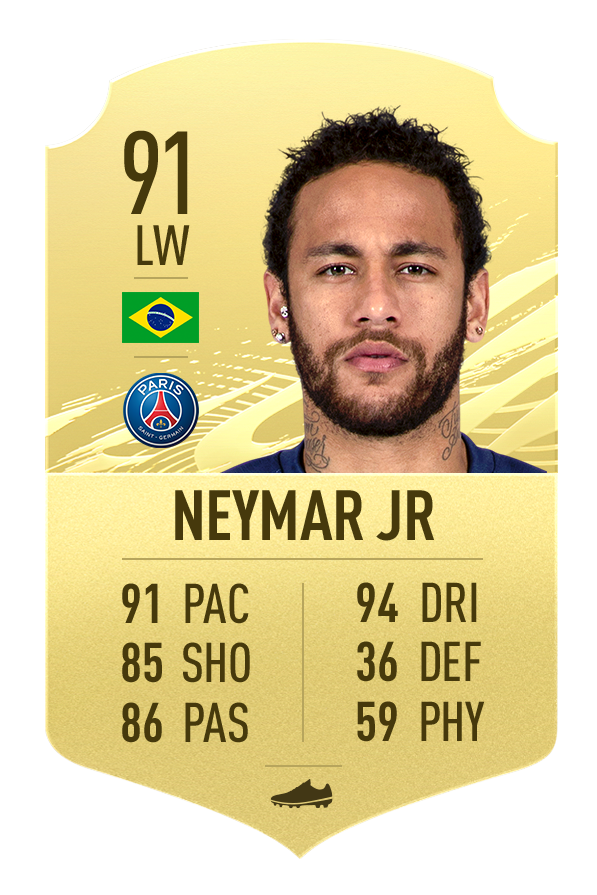 A single rating point now separates Neymar from his PSG teammate Mbappe, with the gap closing from three points in FIFA 20. Could be a sign of an imminent changing of the guard. 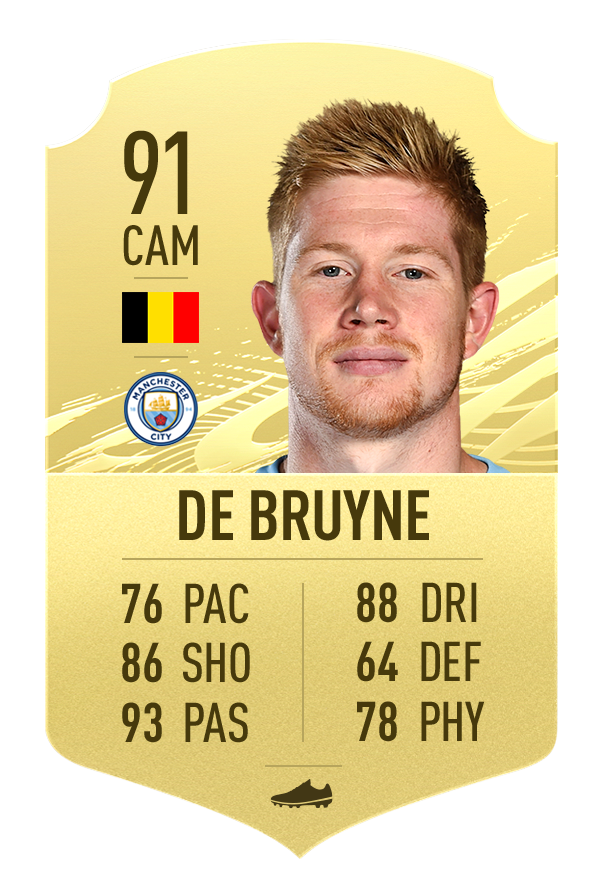 Just like last year, De Bruyne is the best player in the Premier League as far as EA Sports is concerned, which tallies with him winning the PFA Player of the Year award this week. 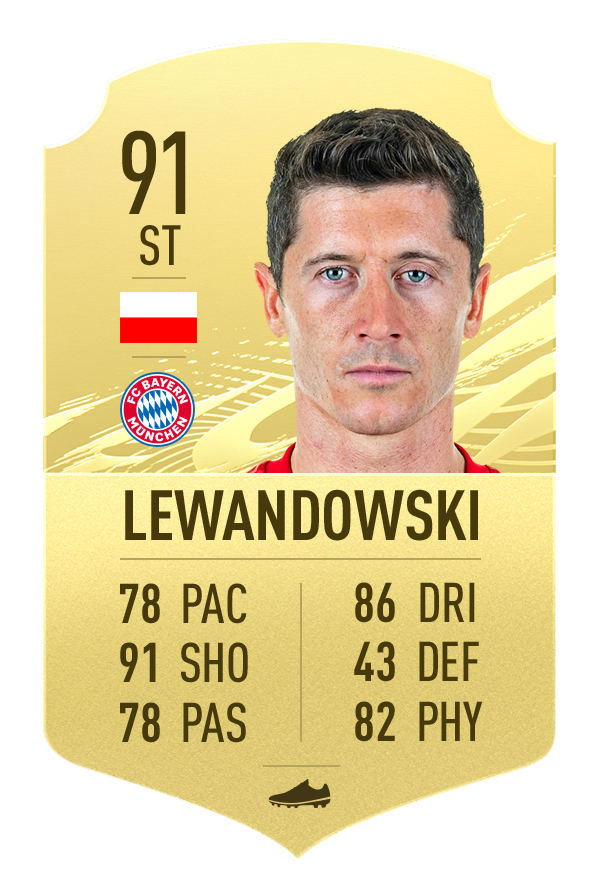 Unsurprisingly given he’s coming off the back of a Treble-winning, 55-goal season, Lewy is the best out-and-out striker in the game. Such a shame he picked the year that the Ballon d’Or was cancelled to hit such heights.

The Bayern hitman has rocketed up from an overall ranking of 15th (with a rating of 89) last year to being classed as the third best player in FIFA 21 (91), just behind the “Big Two” in the pecking order. 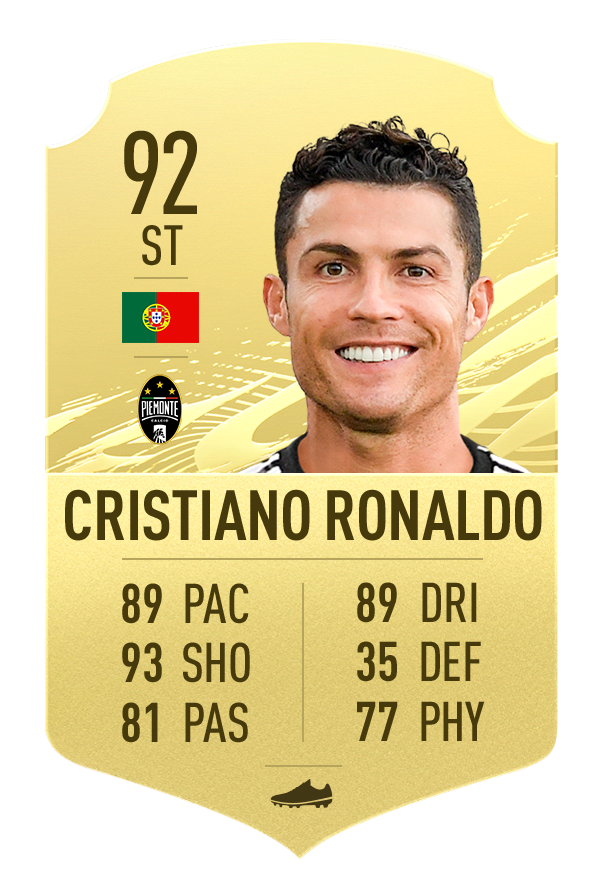 Ronaldo must once again make do with second place having failed to usurp his nemesis for the last three years. 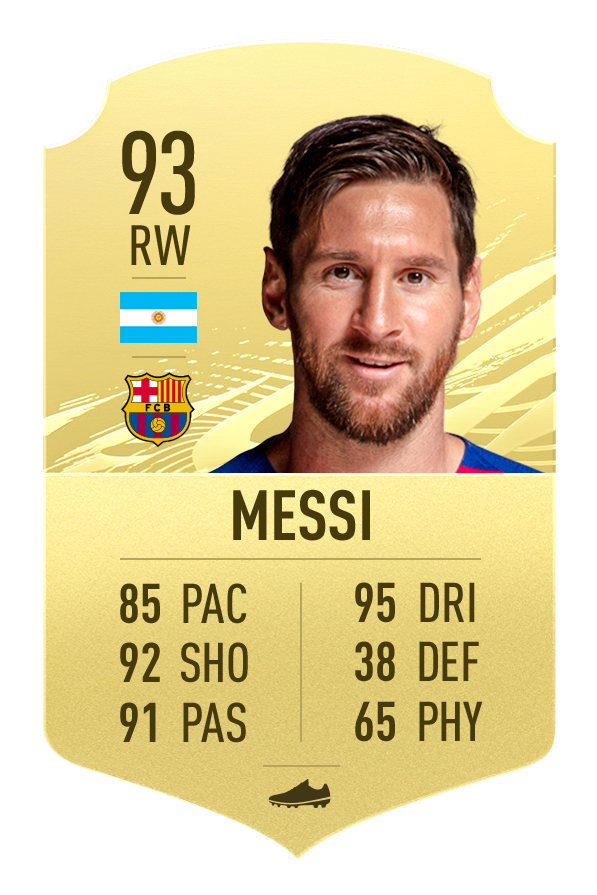 He may have endured a trophyless season with Barca that culminated in that 8-2 Champions League evisceration by Bayern Munich and a shock transfer request that caused a collective sharp intake of breath throughout the football world (followed by a dramatic U-turn when he decided to stay), but Messi can at least take some consolation from the fact he still reigns supreme in the FIFA universe.

Whether the fact his rating has decreased by a single point since last year is down to his club’s barren campaign or an overall decline in his abilities, only time will tell.

You can view the full Top 100 player ratings for FIFA 21 here. The game will be released by EA Sports across a wide range of platforms on Oct. 9, 2020.

In 2021, Cowboy Cerrone will retire; Khamzat Chimaev will fight for title