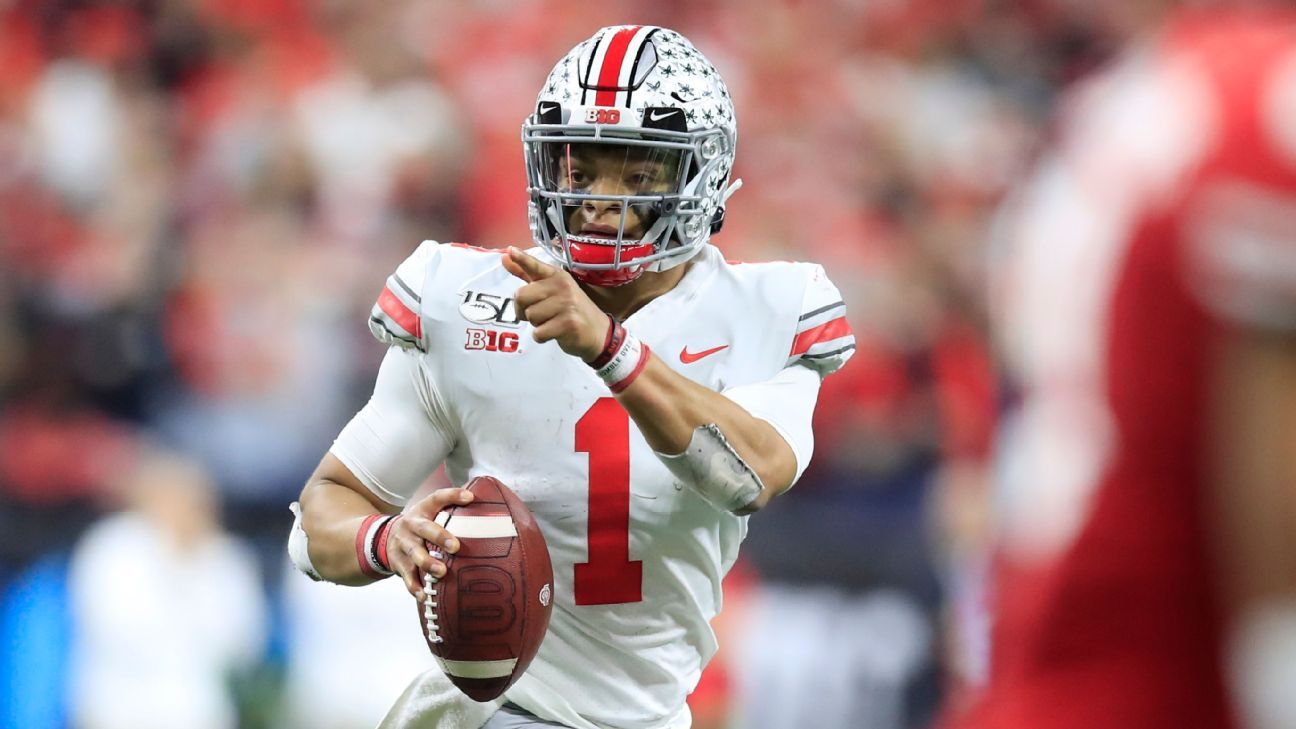 Piece by piece, college football is coming back for six of the 10 FBS conferences, and with each game and ensuing Saturday, the College Football Playoff becomes more of a reality. Every time these teams can muster together four quarters in the midst of a global pandemic, it becomes part of their playoff résumé — no matter how ugly it might look.

Their stories this season truly began on Saturday, with victories by Clemson and Notre Dame, two playoff contenders suddenly joined — but also pitted against each other — in the ACC. Oklahoma and Texas also won their respective games against lesser nonconference opponents.

All while the SEC, Big Ten and Pac-12 were still watching. The SEC is scheduled to begin its season on Sept. 26.

Because the COVID-19 pandemic has the potential to disrupt — or end — the season at any moment, each game matters more than ever before. The 13-member selection committee will begin its six weekly CFP rankings on Nov. 17.

“This is a year when we don’t have any way of knowing,” Big 12 commissioner Bob Bowlsby said recently on The Paul Finebaum Show. “We have a 10-game schedule. We don’t know if we’re going to get 10 games played. We don’t even know if we’re going to have a College Football Playoff championship because that happens right in the teeth of the cold and flu season. There are some challenges built into that we certainly need to be mindful of. If some of us play 10 games and some of us play six, those are things that the playoff committee has to take into consideration.”

Here are five big questions surrounding the playoff in what is already a historically abnormal season:

Can the Big Ten and Pac-12 rejoin in time for the playoff?

It would be a herculean task to move the CFP — even only a week or two — but not impossible. The playoff is an event that is typically planned at least a year in advance, and there would be a mad scramble to rearrange everything from team travel and hotel arrangements to TV contracts and the semifinal games. Plus, it’s also the end of the NFL season, which makes it extremely tricky to schedule around. There are so many unknowns that any scenario or model at this point is strictly hypothetical. The stars have to align for the Big Ten and Pac-12 to do the same.

Pac-12 commissioner Larry Scott has said he has spoken to Big Ten commissioner Kevin Warren with the hopes they could align their return, but conceded it “may or may not work out.” The more likely scenario at this point might be the Big Ten starting early enough to sneak back into the playoff race, while the Pac-12 operates on its own timeline.

In order for them to both rejoin the conversation at the same time, here’s the most ideal scenario:

The Big Ten and Pac-12 start in October and play a shorter schedule: If they can start as early as Oct. 24, that would give them eight weeks to play eight games, plus the conference championship games on Dec. 19 — just in time for CFP Selection Day on Dec. 20. There’s no wiggle room in this model, though, for COVID-19 disruptions, and no bye weeks — but it’s an eight-game, conference-only schedule that ends with a winner.

The question is whether SEC commissioner Greg Sankey, ACC commissioner John Swofford and Bowlsby — who would have navigated their respective leagues through a longer schedule — would be willing to open the CFP to their Power 5 counterparts with fewer games.

A Halloween start would obviously cut that schedule to seven games. There would be a point where it would legitimately be unfair, but what if Ohio State went 7-0 and Alabama finished 7-1 with disruptions? Of course, there’s no guarantee anyone is going to get through an entire schedule this season, and it’s highly likely the selection committee will be presented with the most uneven résumés it has seen — and probably will ever see.

What will be different about this season’s CFP?

The CFP has not yet determined a minimum number of games teams need to play or any other pandemic-related benchmarks in order to qualify for a semifinal spot this season. It also hasn’t announced any changes to the protocol for determining the top four teams.

“At this time, the thresholds to participate in the CFP are being bowl-eligible under NCAA standards and being chosen by the selection committee,” CFP executive director Bill Hancock told ESPN. “I’m not in a position to speculate about whether there might be any changes this year. This will be a matter of the management committee, at the appropriate time, giving guidance to the selection committee. As with everything about 2020, we have to be patient and allow events to play out. The committee’s job is to evaluate the teams based on the games played on the field, and that’s what they’ll do.”

How will the committee judge a contender that might have played fewer games because of the virus? How will it view a loss in which multiple key players were missing because of the virus? The strength-of-schedule component will naturally lose some of its importance because impactful games such as LSU-Texas and Oklahoma-Tennessee have been canceled, along with the traditional ACC-SEC rivalry games. Fans are likely to continue to hear from the committee chair how many wins a team has earned against CFP Top 25 opponents, and how many wins have come against teams with records above .500. With the majority of games coming against conference opponents, though, losses will add up quickly for most teams.

Three major conferences, four spots. So either one of them places two teams in the top four, or … the Group of 5 crashes the party. The two most likely possibilities are the SEC again places two in the semifinals, or the ACC gets two teams in for the first time in the CFP era, with both Clemson and Notre Dame earning top-four finishes.

Notre Dame’s home win Saturday against Duke isn’t enough to answer this question, and the SEC hasn’t snapped a ball yet, but until proven otherwise, the SEC is the deeper league. Expectations are high for both Florida and Georgia this season, and the winner of their scheduled Nov. 7 meeting could join Alabama in the CFP.

In order for both Notre Dame and Clemson to finish in the top four, the ACC would need to have more teams ranked by the committee. North Carolina might be the only ranked team the Fighting Irish face all season — other than the Tigers, who are set to visit South Bend on Nov. 7 for their only game against an opponent that’s currently ranked. Could splitting a pair of close, thrilling games — at Notre Dame and in the ACC championship game — be enough to get both into the CFP?

Is it as simple as three conference champions plus one?

Where’s the drama? Where’s the yelling? Where’s the DEBATE???? We’re gonna miss you, Big Ten and Pac-12. There will always — always — be an argument about the fourth spot, even in the midst of a global pandemic. But it probably won’t be as dramatic as usual without two other Power 5 conference champions in the discussion.

So yes, it’s hard to believe there would be a scenario in which the ACC, SEC and Big 12 champions wouldn’t finish in the top four.

How can the Group of 5 get a shot?

It can happen — maybe — if one of the top-ranked teams in the American Athletic Conference finishes undefeated and the AAC has multiple teams ranked in the final CFP Top 25.

No. 20 Cincinnati, No. 21 UCF and Memphis are the league’s top three teams, but Cincinnati is scheduled to play both, and Memphis and UCF both play each other so … one of them has to separate and emerge as a legitimate contender. It’s a Catch-22, though, because they also need each other to stay ranked to help their strength of schedule compete with that of the Power 5 conference champions.

Of course, it would also help the AAC champion’s case if the second-best teams in the Power 5 conferences had at least two losses. That would help eliminate a second team in the top four from one of those leagues.

How Ryan Day is turning Ohio State football into Quarterback U