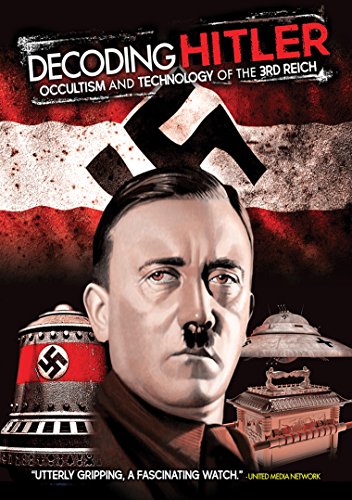 The Nazi party was obsessed with the Occult; they scoured the globe in search of mysterious forces that would enable them to build their 1000 Year Reich. From the Holy Grail to the lance that pierced the side of Christ; from Tibet to the Antarctic; no region or mythological device was ignored. Explore how the Nazis developed technology decades in advance of the US and Russia and were close to launching new weapons unlike any the world had ever seen. Adolf Hitler: Pure Evil There have been many evil men in the history of the world including serial killers, rapists and mass murderers – but none of them as evil and as monstrous as Adolf Hitler. He dominated the hearts and minds of the German nation and catapulted them into infamous world history. But what force did insiders claim possessed Hitler, enabling a failed painter and politician to become the Fuhrer? Technology of the 3rd Reich During WWII, the Nazi’s achieved massive leaps in technology. From the first jet aircraft and V-2 rocket encompassing incredible advancements in science and engineering, the Nazis were years ahead in every area, including genetic manipulation, mass hypnosis and unfathomable experiments into the nature of time and space itself. But where did this quantum leap emanate from?

Premium Payback Period Model and its Application in Stock Investment