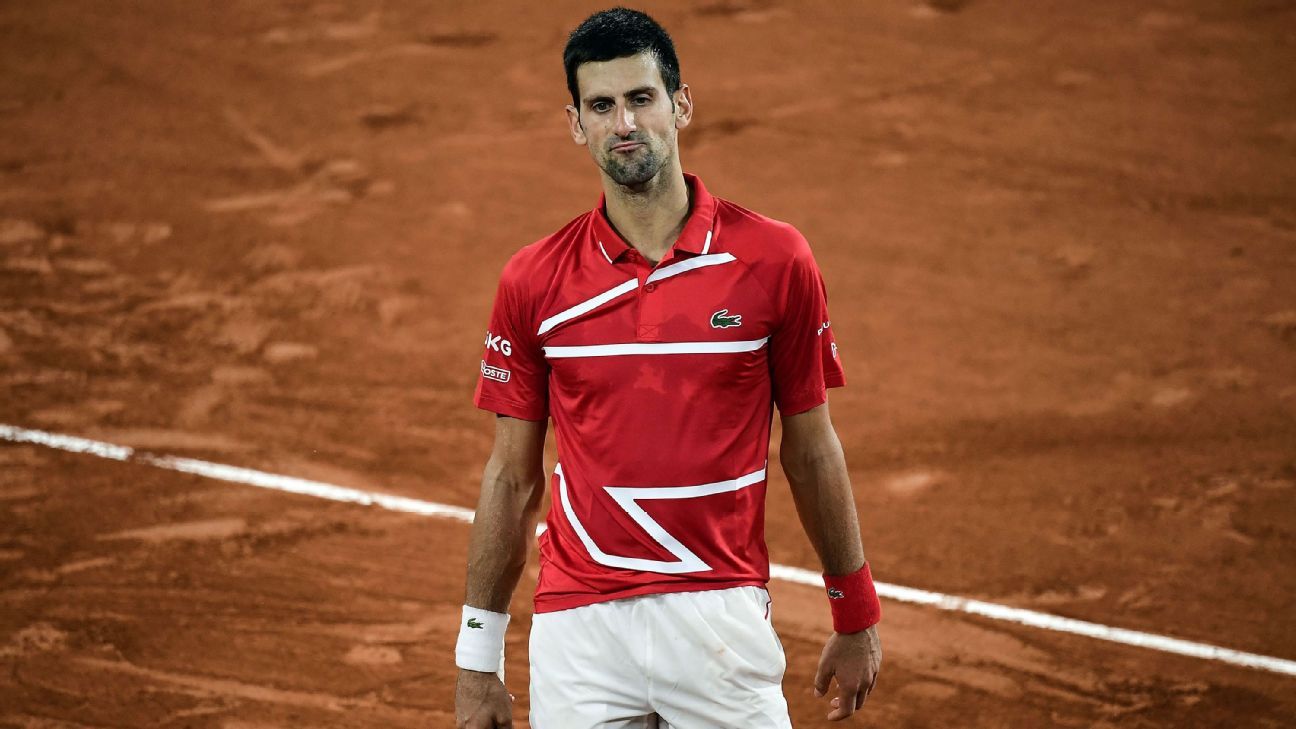 Novak Djokovic once again stands at the brink of completing the most difficult single-match assignment on Sunday at Roland Garros: defeat Rafael Nadal, who has never lost a final in 12 championship matches at the French Open.

Lest you take that for hyperbole, listen to Djokovic.

“Well, isn’t it obvious?” he asked Friday evening after defeating Stefanos Tsitsipas 6-3, 6-2, 5-7, 4-6, 6-1 in the semifinals. “He [Nadal] won this tournament so many times that I don’t think any player has won that many times any tournament. He’s lost twice in his entire career on this court.”

Djokovic and Nadal, the top two seeds, will play for all the French Open marbles for the third time in their careers in the newly renovated Court Philippe-Chatrier. Nadal reserved his place in Sunday’s final by dispatching Diego Schwartzman in straight sets 6-3, 6-3, 7-6 (0) earlier Friday.

That stadium might not be “the house that Nadal built,” but he has rented it almost without interruption since 2005, when, having just turned 19, he first belted his way to a championship on Chatrier’s gritty, red, dirt floor.

“I know it is a court where I have been playing well for such a long time, so that helps,” Nadal said after beating Schwartzman, who stunned Nadal just a little more than three weeks ago in the final of the Italian Open. “At the same time, he [Djokovic] has an amazing record here, too, being in the final rounds almost every single time.”

Were it not for Nadal, Djokovic might have as many as four or five French Open trophies on display in his home, instead of just the one he earned to complete his career Grand Slam in 2016 — when Nadal withdrew from the event during the first week because of a wrist injury. Nadal has bedeviled Djokovic six times in seven meetings in Paris in the springtime (this year’s event was postponed four months because of the coronavirus pandemic), including twice in the final.

What does Nadal, with 12 titles and a Twilight Zone record of 98-2 at Roland Garros, have to worry about?

“Different circumstances, different kind of tournament and different situation,” the 34-year-old said, referring both to the pandemic that has limited his clay-court preparations and the conditions at this chilly, damp, October edition of the French Open.

“The conditions are different than the ones that we are used to playing in May and June,” Djokovic said. “I think that could be a better chance for me — obviously, the ball not bouncing as high over the shoulder as he likes it usually. [But] look, regardless of the conditions, he’s still there. He’s Rafa, he’s in the finals, and we’re playing on clay.”

Nadal’s superiority at Roland Garros belies the dazzling arc of Djokovic’s career. The 33-year-old has been, by consensus, the best player in tennis since 2011. He has won 16 of his 17 major titles in that period — Nadal bagged 10 and Roger Federer four — while reversing his fortunes in head-to-head matches with Nadal and Federer.

In the first five years of their rivalry, ending in 2010, Nadal edged Djokovic in 16 of 23 matches, including all nine meetings on clay. Starting in 2011, though, Djokovic reversed the tide. He went 22-10 against Nadal, which has lifted him to a 29-26 overall lead in their series.

Most significant regarding Sunday, Nadal is 8-7 against Djokovic on clay since the start of 2011 — the beginning of the Serbian star’s glory days. With the exception of three French Open meetings, those have been best-of-three-set matches.

The momentum in the rivalry clearly belongs to Djokovic, but the “King of Clay” has been so overpowering in Paris that in more than 100 matches, he has been forced to play five sets on only four occasions. He has won them all, including a memorable 2013 semifinal against Djokovic.

That win stands out on Nadal’s career highlight reel because it occurred when Djokovic, the youngest of the game’s Big Three, was rapidly closing the gap on his two iconic rivals. Nadal held on to win that four-and-a-half-hour barn burner 9-7 in the fifth.

That was a bitter pill for Djokovic to swallow. His declared main ambition for the year was to win the tournament to complete his career Grand Slam. Also, Jelena Gencic, Djokovic’s childhood coach, died the middle weekend of the tournament. He badly wanted to dedicate a win in Paris to her memory.

“It’s been an unbelievable match to be a part of, but all I can feel now is disappointment. That’s it,” Djokovic said after losing the agonizingly close match.

The moment was as sweet for Nadal as it was bitter for Djokovic. It was the first major Nadal played after missing seven months because of knee tendinitis.

Nadal was able to shut down Djokovic’s drive to complete a career Grand Slam at Roland Garros one more time with a ragged, four-set final in 2014.

In contrast to the conditions forecast for Sunday (a high of 58 degrees Fahrenheit, with rain), that match was played in suffocating heat and humidity. Djokovic looked spent in the late stages, his eyes sunk deep in their sockets. He appeared to vomit during a changeover early in the fourth set.

“It’s not impossible, but it’s very difficult to stay with Rafa on this court throughout the whole match on the highest level of performance,” Djokovic said afterward.

However, the ground beneath Nadal’s feet soon shifted as unpredictably as if it were made of loose clay. After that win at Roland Garros, he experienced the first real slump of his career. He faltered on grass, and a wrist injury and appendicitis resulted in his missing the US Open. He didn’t make a semifinal all year after that French Open title.

Nadal continued to struggle in 2015. He didn’t earn a title on the Euroclay tour he habitually dominated. He absorbed five losses on clay — more than he had in any five-year period earlier in his career. Nadal’s ranking dropped to No. 7 by the time he prepared to defend his French Open title.

Meanwhile, Djokovic went on a 36-2 rampage before the start of the French Open. He carried a 27-match winning streak into his quarterfinal with Nadal. Ranked and seeded No. 1, Djokovic showed no mercy, drubbing Nadal 7-5, 6-3, 6-1.

“I did lose to him on this court most of the matches that we played, but I also won one match in 2015 in straight sets in quarters,” Djokovic said Friday. “That’s the match that I’ll look back at and obviously try to take some positives out of it and use it tactically against him.”

The two men have met 11 times since that breakthrough win for Djokovic — but never at Roland Garros. Djokovic won eight of those battles, but Nadal won three of four on clay. With both men chasing Federer’s men’s record for Grand Slam singles titles (Federer has 20, Nadal 19 and Djokovic 17), this match swells with greater significance than any they have contested at the French Open.

Djokovic might indeed draw some confidence and inspiration from having beaten Nadal in the throne room at Chatrier the last time they played there, but five years is a long time to keep a flame burning.

As Djokovic said of Nadal, “He’s still there. He’s Rafa, he’s in the finals, and it’s on clay.”

Messi or Maradona? Donovan or Dempsey? You decide soccer’s GOATs in these countries